LEEKUO produces equipment required during the refining process of petrochemical plants. With the focus of high-performance products and better energy saving outcome, LEEKUO contributes to clients’ best benefits by reducing the cost of inspection and maintenance.

Founded by Mr. Wu Kuo Ping in 1970, LEEKUO has the belief of being innovative with its enthusiasm and professionalism to build up a very strong team. Based on its core value – reliable, passionate, effective, sustainable, the team work has won the reputation in the industry as well as the support from the clients, building up the strong team and wining the trust and good reputation from clients.

Quality, reputation, service and clients satisfaction are the spirit of LEEKUO. There is no shortcut for managing a company. Being adequately competitive is a must. In addition to those basic factors such as business efforts, innovative ideas and proper business strategies, the most important thing is the core of technology. LEEKUO emphasizes integrated resources to help clients improve equipment efficiency, care of safety and cost reduction. 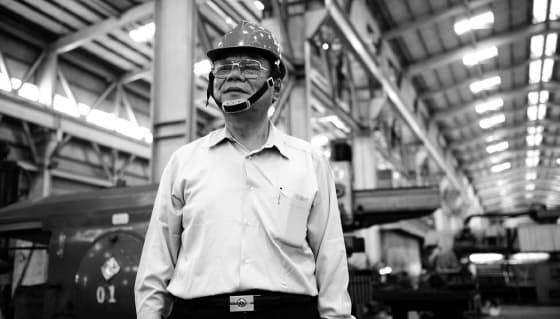 God would give people appropriate reward in accordance with their hard-working.

From a mini-mill smaller than 180 square feet to a 1440000 square feet plant, the prosperity of LEEKUO is not only about the number of business, but a story about people receiving rewards from God because of their hard-working.

In the mid-summer of 1968, Mr. Wu Kuo Ping (chairman of LEEKUO) usually rode a motorcycle which was his wife's dowry to work in the morning as an employee. He became the boss when he returned to his hut at night at Yuanchung port, Kaohsiung.

In a typhoon night, the strong wind and heavy rain overshadowed numbers of lathes, the rain permeated into his mini-mill from the cracks of the ceiling. Wearing raincoats indoor, Mr. Wu and his employees finished their customers’ orders then went back to his office, continued on the accounting and estimation works.

In 1970, the old hut was rebuilt with corrugated roof and it was given the name “LEEKUO Machinery Plant”. During that time, Mr. Wu’s wife, Wu Tsai He Mei worked hard together in the kitchen next to the plant, she was busy at preparing the meals for their families and workers, and washing the overalls covered with oil stains.

LEEKUO Machinery Plant operated more than 16 hours a day year round, its business expanded from small iron processing to components of underground water pipe entrusted by Public Construction Bureau and waterworks, LEEKUO is also responsible for maintaining the heating tanks of Taiwan Cement.

Since1973, LEEKUO began to work as a temporary OEM for petroleum refinery of CPC, riveter steel structural engineering at Lin Yuan, Kaohsiung, equipment cleaning bench works, and sporadic structural steelworks of Kaohsiung petroleum refinery. In 1976, LEEKUO manufactured heat exchangers for CPC Kaohsiung, welding and riveting plant for the first time. With his own determination and his long-tern reputation, Mr. Wu goes deeper and deeper into the heat exchanger manufacturing and maintaining industry that he yields positive results in this professional field.